The story of the West is the tale of more than one people, and no visit to The Great American West would be complete without experiencing the culture and heritage of America’s native tribes.

To witness the power of a powwow or wacipi (Dakota, Lakota and Nakota for “dance” and pronounced wa-CHEE-pee) is to be part of a powerful tradition that existed long before white settlers set foot on this soil. It’s a social event where dancers don regalia that includes colorful finery, elaborate featherwork, and intricate beadwork as they perform dances that have been passed down from generation to generation.

Different tribes host powwows throughout the year, but the Black Hills Powwow—held annually in Rapid City—may be the biggest, drawing thousands of dancers and visitors every year. No matter which powwow you attend, you’ll feel the energy as dancers move gracefully to the rhythm provided by traditional drummers and singers. Should the spirits move you, the opportunity to join in the dancing will sometimes appear in the form of an intertribal dance. You can also delve deeper into the culture with foods like Indian tacos, fry bread, and a fruit sauce/ jam called wojapi (pronounced wo-zha-pee). Learn more on South Dakota powwows and proper visitor etiquette

Once home to more than a dozen Indian tribes, Wyoming today counts among its residents more than 11,000 Shoshone and Arapaho Indians who live on the Wind River Reservation. Located southeast of Jackson, the 2.2 million-acre reservation is the site of festive Indian powwows each summer. The Plains Indian Museum also holds an annual powwow in the Robbie Powwow Garden at the Buffalo Bill Historical Center in Cody. Wyoming is home to numerous sites held sacred by Native Americans, including Devils Tower (also known as Bears Lodge) and the intriguing Medicine Wheel National Historic Site. Located in Bighorn National Forest near Lovell, the ancient stone circle with interior “spokes” has been likened to Stonehenge, and is believed to have been constructed by Indian tribes for religious or astrological purposes between 1200 and 1700 AD. Today, the site is used by Native Americans for religious ceremonies, and is open to the public from June to September.

Montana makes it easy for history buffs to experience a taste of what life in the untamed West was like hundreds and even thousands of years ago. In particular, the state’s Native American heritage is well preserved. The ancestral lands of the Blackfeet Indians, Montana is home to seven Indian reservations and 11 tribes whose powwows and other tribal events are not to be missed. Visit the Museum of the Plains Indian in Browning – site of the annual North American Indian Days summer festival – or immerse yourself in the traditions of the Salish and Kootenai tribes on the nearby Flathead Indian Reservation. Witness what’s believed to be the largest modern-day encampment in the world. at the annual week-long Crow Fair and Rodeo, a celebration of the Apsáalooke Nation held each August in Crow Agency.

Native Americans were the first inhabitants of what is now North Dakota and today their colorful history is on full display at powwows, earthlodge villages and through tours by NativeWays.

North Dakota’s individual tribes have distinct and different origins, histories and languages. Plains tribes are united by core beliefs and values that emanate from respect for the earth and an understanding of humankind’s relationship with nature.

Visit each of North Dakota’s five reservations, talk to the people and visit historically important sites to learn more about the culture of each tribe.

Home to the Coeur d’Alene, Kootenai, Nez Perce, Shoshone-Paiute and Shoshone-Bannock tribes, Idaho has a storied indigenous culture. Opportunities to experience and connect with the traditional customs and stories of Native American tribes exist throughout the state. Catch the sights and sounds of special ceremonies during summer celebrations, including the Shoshone-Bannock Festival Powwow and the Coeur d’Alene Julyamsh Powwow. Visit the Spaulding site at the Nez Perce National Historical Park to discover the legends of the Nez Perce culture. Travel the Sacajawea Historic Byway for a history-filled detour, including a stop at the Sacajawea Interpretive, Cultural & Education Center to observe exhibits and artifacts focused on the infamous Shoshone woman who helped guide the Lewis & Clark expedition.

In the Great American West, our focus on the great states of Idaho, Montana, Wyoming, South Dakota and North Dakota has always been centered on their natural beauty, their thriving tourism industries and the part each played in shaping American’s west into the diverse and vibrant enclave it is today.  One central aspect of each state’s history and modern culture is the fascinating role American Indians played – and continue to play – in America’s West.

As a visitor to the Great American West Region, you have the opportunity to learn and experience firsthand how American Indian tribes continue to provide valuable economic and cultural contributions to the American Rockies region.  As you begin to explore, however, it is very important to keep in mind that customs and American Indian laws should at all times be heeded in order to make this experience as productive and meaningful as possible for all parties.  Below are several points that should be considered as you venture into American Indian territory:

Part of the exceptional culture and history in The Great American West is firmly rooted in American Indian tradition.  As you explore everything this region has to offer, simply keep in mind these few guidelines and respectfully enjoy all they have to offer!

The Powwow is held annually in the Lone Star Arena at United Tribes Technical College in Bismarck, North Dakota and has become one of the premier cultural events of North Dakota, receiving numerous awards over the years. Representing over 70 tribes, featuring over 1500 dancers and drummers, and drawing over 20,000 spectators the Powwow has become a must-see event!

“My fellow chiefs and I would like the white man to know the red man has great heroes, too.”

These are the words Chief Henry Standing Bear wrote to sculptor Korczak Ziolkowski in 1939 urging him to visit the Black Hills and carve a mountain sculpture honoring American Indians. Fifty-five years after Ziolkowski began carving Crazy Horse Memorial, his family continues the dream and work progresses on the world’s largest mountain sculpture. When finished, Crazy Horse will stand 641 feet long and 563 feet high.

See the sculpting live during your visit or attend one of the biannual night blasts, when spectacular ceremonial blasts light up the mountain with incredible fireballs and specially designed pyrotechnical features. Night blasts occur twice a year. The first blast takes place annually on June 26, a date that commemorates both the birthday of the late Mrs. Ruth Ziolkowski—wife of the late Crazy Horse sculptor—and the anniversary of the Battle of Little Big Horn, where Crazy Horse was a main strategist in the defeat of Lt. Col. George Armstrong Custer and his troops. The second blast is on September 6th, the date of both Crazy Horse’s death in 1877 and the birth of sculptor Korczak Ziolkowski in 1908. Learn more

Discovered by a Dakota Wesleyan University student in 1910, the Mitchell Prehistoric Indian Village is the only active archaeological site in South Dakota. Two students found rare 1,000-year-old bison bones in 2016. In 2017, students from South Dakota and England together uncovered an amazing cache of American Indian tools. The sheer amount of artifacts both found and undiscovered—the site is believed to be the home of 70 to 80 buried lodges—is one of the reasons why Mitchell Prehistoric Indian Village is considered by the U.S. Department of the Interior to be one of the most important archaeological sites in the Great Plains region.

Visitors to the site aren’t allowed to dig, but they can immerse themselves in Native American history by checking out the site for themselves inside the Archeodome, which encloses the dig site and houses exhibits and a laboratory. The nearby on-site museum features historical items recovered from the site as well as audio/visual exhibits and reproductions of an earthen lodge and a bison skeleton. Hands-on activities are available for kids of all ages. Visitors can dive even deeper into history during the village’s annual special events, including Archaeology Awareness Days and Lakota Games on Ice. 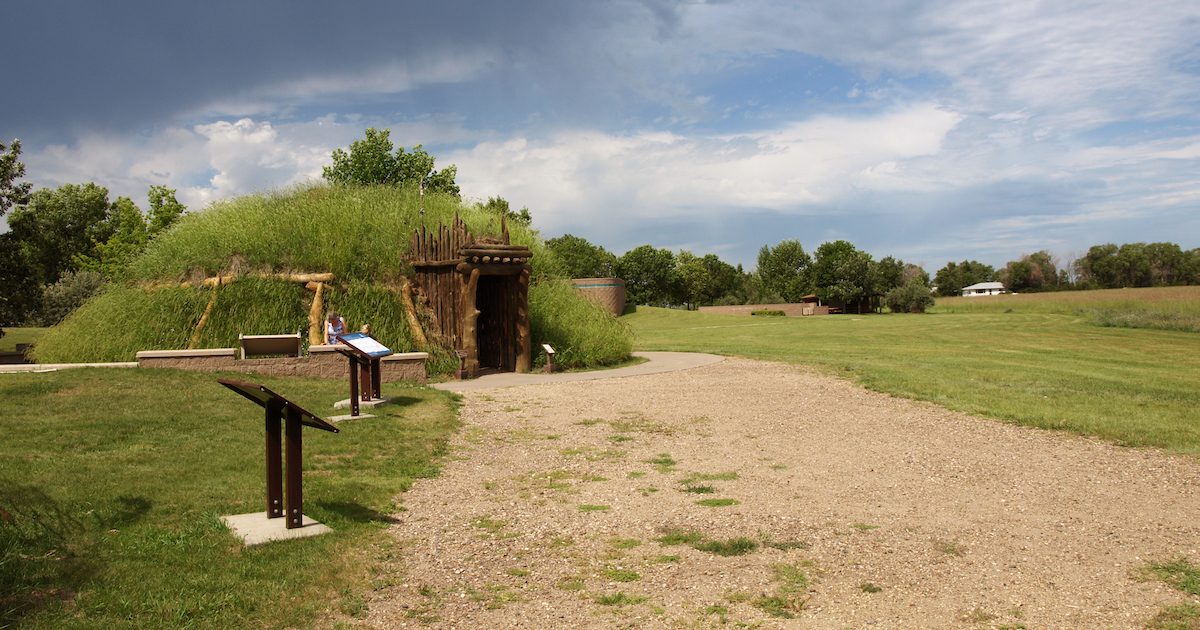 Once home to Mandan and Hidatsa peoples, and where Sakakawea was living when she met Lewis and Clark’s Corps of Discovery. Learn more 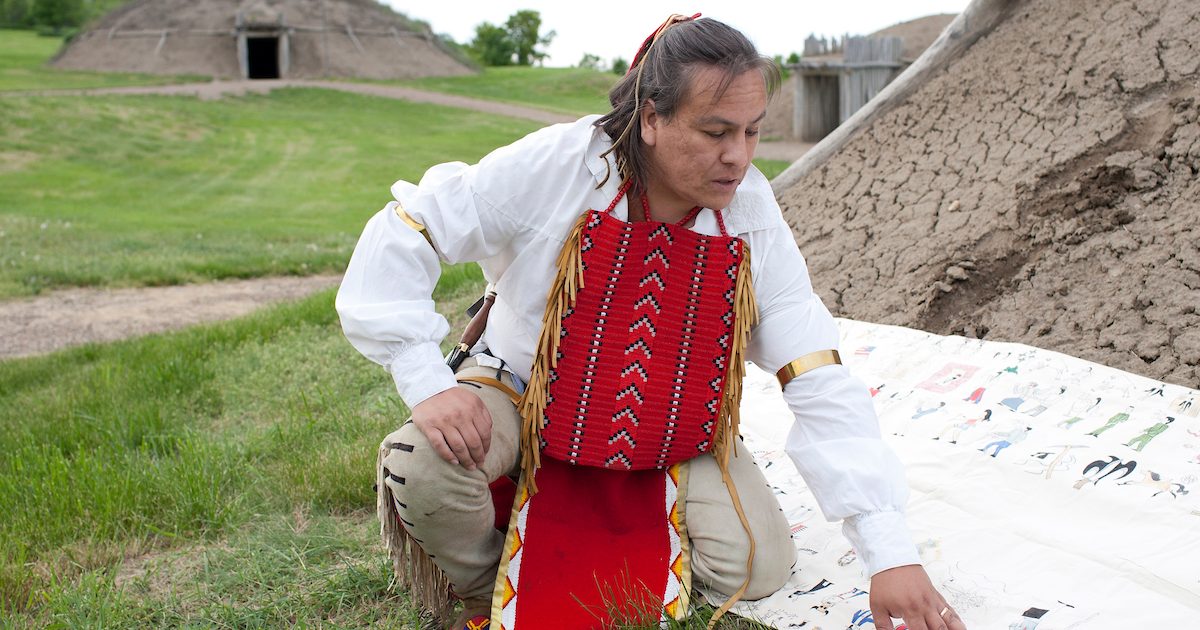 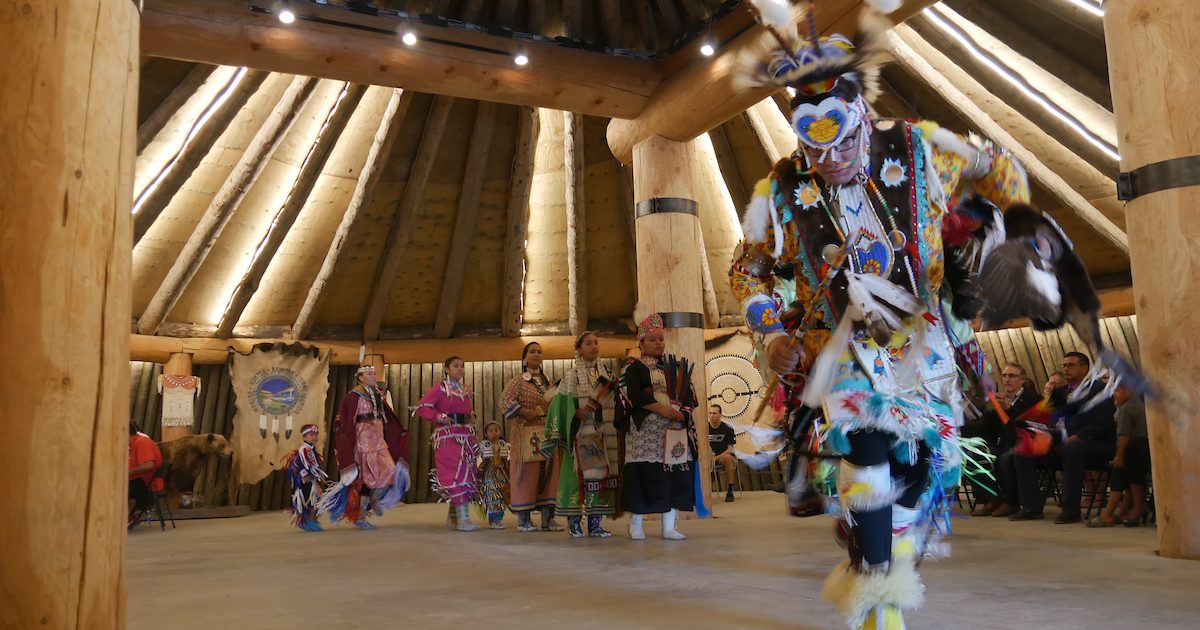 Located near New Town, North Dakota, the Earthlodge Village is found at the north shore of Lake Sakakawea. Visitors can experience the village first-hand by camping in the earthlodges and teepees.

As the ancestral home of the Lakota, Nakota and Dakota tribes, South Dakota offers visitors an opportunity to experience authentic Native American culture. Travel the Native American Scenic Byway through the heart of the American Indian country. Visit the tribal lands of the state’s nine Indian tribes. View and purchase native arts and crafts at the Akta Lakota Museum in Chamberlain, the Cultural Heritage Center in Pierre, the Narrows Historical Interpretive Area near the town of Lower Brule, the H.V. Johnston Lakota Cultural Center in Eagle Butte, or Prairie Edge in Rapid City. 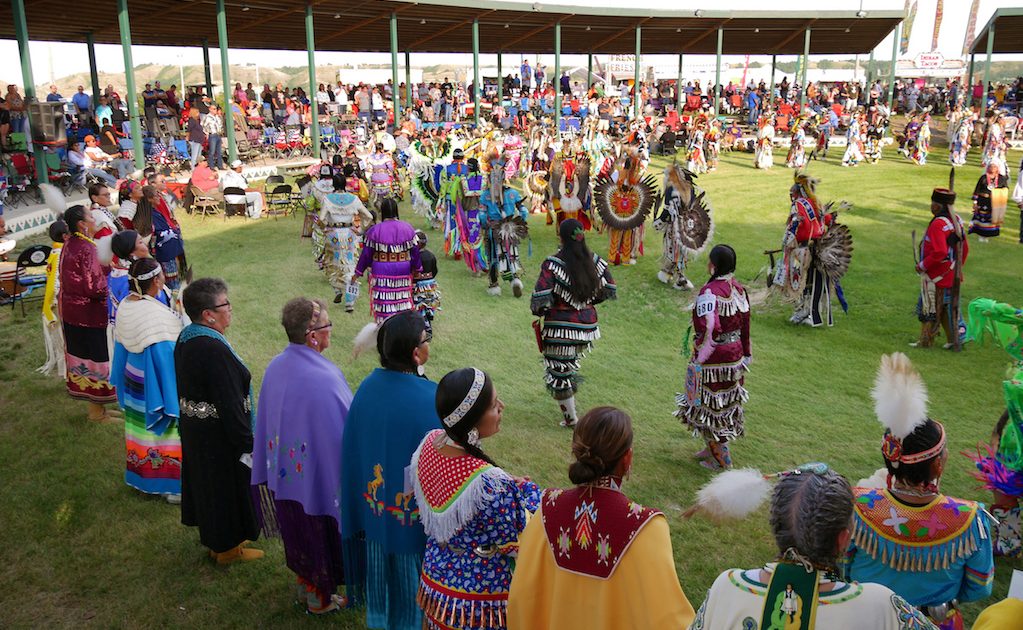 Part of the Lakota/Dakota/Nakota nation that once controlled a vast area from the James River in the Dakotas to the Big Horn Mountains of Wyoming. When gold was discovered in 1874, the area was broken into six smaller reservations. Standing Rock was home to Sitting Bull and visitors can see his burial site and artifacts at Sitting Bull Visitors Center at Fort Yates and along the Standing Rock National Native American Scenic Byway.

The people of Spirit Lake Nation near Devils Lake migrated from near Lake Superior to the Great Plains in the early 1800s. Visit Fort Totten State Historic Site, which once served as a fort and boarding school and now is a historic site and theater. Nearby Sullys Hill National Game Preserve has a bison herd and prairie dog town. All of this is adjacent to Devils Lake, which is one of top fisheries in the nation. 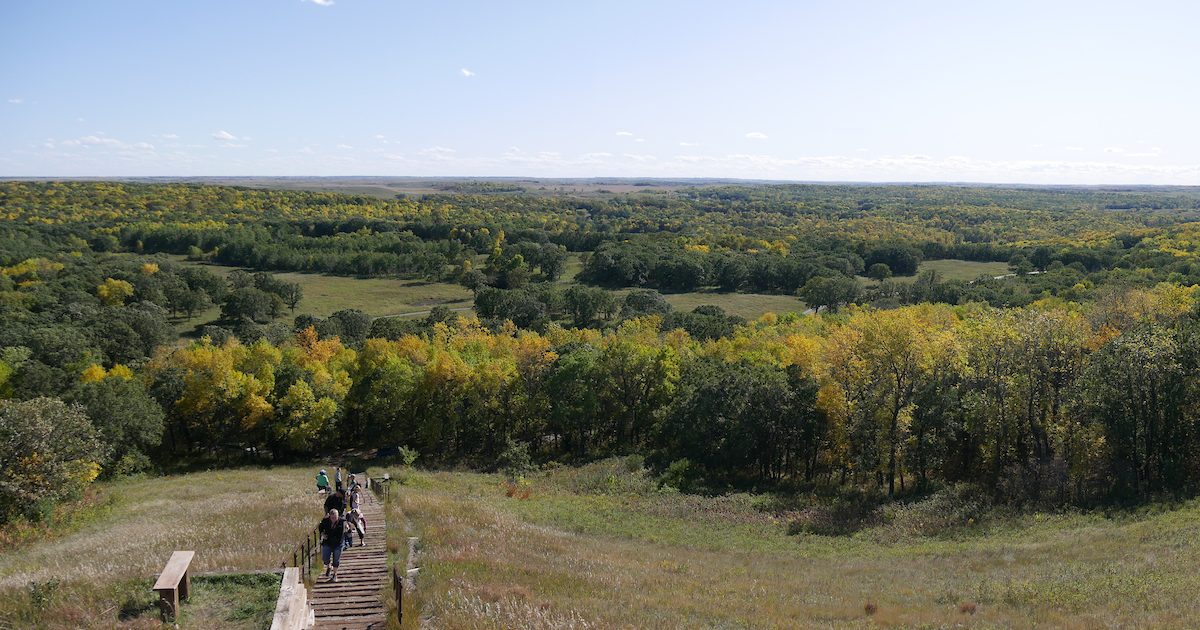 The ancestors of the Turtle Mountain Band of Chippewa migrated from the Great Lakes in the late 1400s to northern North Dakota. Drawn by the fur trade, they became middle men serving as trappers, voyagers, guides and caretakers of the land. Offspring of Chippewa or Cree and French Canadians are known as Métis. Known for their unique music, Métis celebrate annual at the Ryan Keplin Summerfest. Also check out the Turtle Mountain Scenic Byway.

This Sisseton-Wahpeton reservation is primarily in South Dakota with only part stretching north into North Dakota near Hankinson. There you will find a unique 27-hole golf course called Dakota Winds.